Many communities want to lead by example and want to understand how benchmarking works for themselves before designing a program for other buildings in their community. Therefore, these communities will begin the process by benchmarking their own energy use.

Buildings that benchmark their energy use on a regular basis tend to reduce their energy consumption by 2.4% per year, on average. More information on benchmarking and energy savings can be found here: https://www.energystar.gov/sites/default/files/buildings/tools/DataTrends_Savings_20121002.pdf

The City of San Antonio established Revolving Funds for City Energy Efficiency Projects. Thanks to the funds, the City’s energy use has decreased by 7% since 2008 while adding facilities providing increasing city services to a rapidly growing population.

The City of Fort Worth used energy savings performance contracting (ESPC) to improve city facilities. This ESPC has grown to include over 200-buildings that the city both owns and operates – a total area of nearly 6-million square feet. The approximate value of these projects is $67M, whose construction avoids O&M costs of $5.9M annually; the result is a simple payback of 11-years.

The City of El Paso Energy Savings Challenge is a behavior change program within the library and fire departments. The library challenge lasted six months and resulted in savings of $21,000 over the period of the project, with the winning library reducing its energy consumption by more than 19%. The libraries continued to conserve afterward with an additional 3% reduction in energy consumption the following year. The fire station challenge lasted for six months and saw a savings of $8,000, with the winning fire station reducing its energy consumption by 21%. The fire station round saw the largest single-month decrease, with one station saving more than 30% in one month. The project cost $6,800, and saved $30,000, for a net savings of $23,200.

The City of Houston has conducted data collection and benchmarking of city facilities and is releasing building energy performance data for all municipal facilities greater than 25,000 square feet, totaling over 5 million square feet of municipal buildings. According to their website “Benchmarking allows the City to measure building performance over time, prioritize those facilities with the highest energy intensity and take appropriate action if building performance diminishes. The City expects that benchmarking will help it achieve ENERGY STAR® Certification, as well as maintain this certification through constant data monitoring over time.” They have an interactive map that displays building information and 2013 site EUIs.

The City of Knoxville convened a public-private task force to develop a Comprehensive Energy Plan, entered into an energy services performance contract to retrofit municipal facilities, and implemented an energy data tracking system.

Stakeholders are important to the success of any benchmarking project. They help set goals and objectives, and help gather, analyze, and communicate information. Therefore, the first step to creating a benchmarking program for your government buildings is to identify your stakeholders.

Once you have identified your internal stakeholders, you can work with them to clarify the goals and scope of the project and identify the benchmarking project manager and project team. Make sure the stakeholders discuss:

Establishing the purpose for benchmarking will influence the way data is collected and analyzed. Why is your community interested in benchmarking?

When you are working with your stakeholders you should define what size or types of buildings that you would like to be the focus of your program:

Once your project has been scoped, approved, & a team is in place, it’s time to begin benchmarking your buildings using the free PortfolioManager tool. 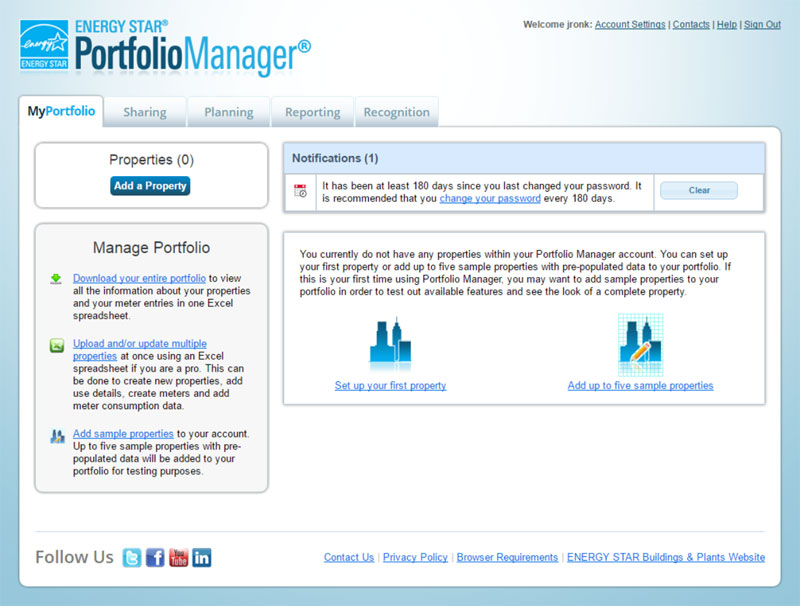 Would you like to learn more about EPA Portfolio Manager?

There are several ways that you can learn more about Portfolio Manager, from written guides, to pre-recorded training, to regular live training events that are all free to use.

Before benchmarking your programs in Portfolio Manager, it will be necessary to create a Portfolio Manager username and password and gather all the data. This will include building address, building square footage, and at least one year of utility bill data.

Would you like to learn more about gathering utility bill data?

The first step in gathering this data is to identify the various metering configurations for the inventory.

A typical configuration includes individual electricity meters for each building and one site level water meter, however this can vary based on size and location.

Ensure that each meter is assigned to the correct facility so that any sub dividing of usage is accurately applied to each facility.

Finally, get the utility bills; there are several possible ways of accomplishing this:

If your community is served by:

You may have access to your electric utility data through Smart Meter Texas.

Would you like more information about Smart Meter Texas?

A Smart Meter records consumption of electric energy in intervals of an hour or less and communicates that information at least daily back to the utility for monitoring and billing. They allow for remote reporting and enable two-way communications with the meter. Austin Energy provides Smart Meters for their customers. In addition, in the deregulated market, Smart Meter Texas website stores daily, monthly and 15-minute intervals electric usage data recorded by Smart Meters, and provides secure access to that data. Smart Meter Texas is a collaborative effort among the following utilities:

Depending on where you live in Texas, you may be able to get your electric utility information from Smart Meter Texas.

You can download the usage data that you can view on the Smart Meter Texas site in the form of a csv file. Depending of which type of report option and the time period that you select, the data will either be available to you for immediate download or you will be notified via e-mail when it is ready for download.

How to Upload Your Energy and Water Data In Portfolio Manager®

In Portfolio Manager, you have three options for uploading your energy and water data.

Just gathering benchmarking data will not result in change. The next important step in the process is to analyze that data so that you can make informed energy management decisions and create a broader energy management strategy for your buildings.

Create and Download a .pdf of your New Benchmarking Plan for energy use of government buildings
Explore Other Resources
Leave Feedback